St Giles’ started as an offshoot of St Mark’s Presbyterian Church in Yeoville in 1924.  From the humble beginnings of a Sunday School that met in  Shipston Lane, Norwood, the new work continued in the Scout Hall in Orange Grove.

In 1952, St Giles’ was granted the status of a Preaching Station by the then Presbytery of Southern Transvaal. A small but enthusiastic  congregation bought the land on which the present hall was built and completed in 1956. Ten years later (1966) the main church building was dedicated during the ministry of Rev R B Mitchell. Giles, after whom we have been named, was a Greek Abbot who lived as a hermit in France.  Before he died c 710,  he had been a patron saint of poor people, the sick and disabled, as well as animals.

The Catholic and Anglican denominations venerated him.  We are thus among many churches and a host of institutions that have been named after him.

In early  2017 we sold our church building at the corner of Garden Avenue and Pine Road in Orchards, to a Baptist congregation. We were very blessed to find our new home and house church from where we worship now, at the corner of Nellie Road and Fanny Avenue, Norwood – almost walking distance from our former church building. We celebrated our first birthday in our new house church on Sunday 20th May 2017. 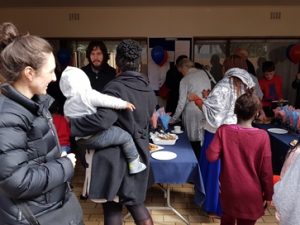